History of The McGlothlin Courtroom

Work began on the McGlothlin Courtroom in 1992, when Stenograph Corporation offered to equip a Computer-Integrated Courtroom for the National Center for State Courts (NCSC). As NCSC did not have a courtroom of its own, NCSC approached Law Professor Fred Lederer at the William and Mary Law School next door, who agreed to host and support the effort.  Stenograph Corporation furnished the Law School’s McGlothlin Courtroom with a multi-frame remote arraignment and visual record system and a state-of-the-art real-time transcription system. Martin Gruen, our current Deputy Director Emeritus and then president of Sight and Sound Solutions, installed the courtroom upgrades. A year later the experiment went a step further, and the idea of an international model facility was born. David Buswell, who was a representative for Stenograph Corporation, became the driving force behind the project.

Although the courtroom was an instant success, no one knew just how big of a success it would become. With no financial support or a budget of any kind, the situation became critical as the workload quickly grew. The project owes its survival in those early days to the National Court Reporters Foundation, which provided funds for the first paid staff member, Court Reporter April C. Artegian, who became the Administrator and Court Record Manager. 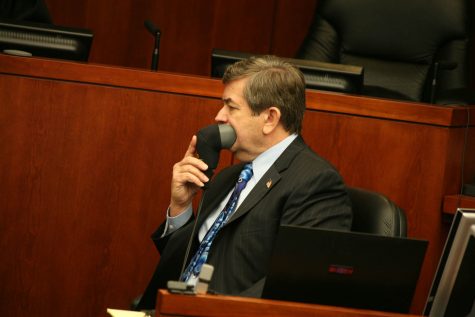 As the project continued to grow, the workload increased beyond the ability of the permanent and volunteer staff, even with the assistance of many talented students. Buoyed by a charitable and timely donation from benefactor Richard Herrmann, Carol Ely was hired as the first full-time administrator.

Through the years, the work has continued thanks to the many generous people who have given their time, talents and finances to help us reach our goals. The Center for Legal and Court Technology owes each of these people a deep debt of gratitude, and would like to add a special thanks to two individuals:  Martin Gruen and Richard Herrmann. Martin has not only given equipment and financial support, but his donation of countless hours of time has made this project possible and continues to sustain it. His creative vision has expanded our project in many ways, notably in the creation of the Court Affiliates Program. Richard Herrmann was the courtroom’s first individual financial benefactor. His donations allowed the project to survive its infancy and enable its growth to continue.

Everyone involved is pleased that we not only enjoy the assistance of many students, but that we are able to financially support some of them in the pursuit of their own educations. Richard Herrmann and Ferd Hauslein provided the first Student Fellowships. We are honored by and thankful for their support.